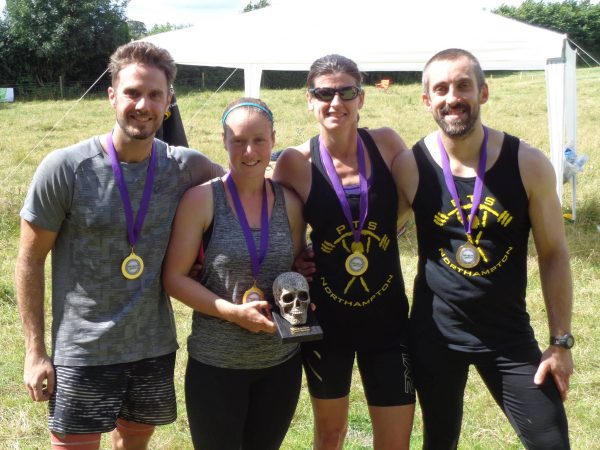 Ah, what a wicked competition today was!

So today’s jolly adventure was the Rumble Fitness competition called Rise Of The Jaguar (yes, seriously!). It was a mixed pairs contest, and a slight departure from the normal set up of these fitness competitions.

Where as it’s normally several events, typically 20 minutes and then a rest, then again and so on, today’s competition was everything, all the events, one after the other, as quick as you could…

Someone brought me fitness Christmas half a year early! One of the things I’ve wanted was a competition where the rest was eliminated, because rest does my head in! Why would I want my opponents to get a rest? Well Dave Peters granted me my wish, bless him!

As it was mixed pairs, I made sure I got first dibs on female fitness machine Kerry Gowen as my partner! But we also had another strong PTS team in the form of Leanne Clifford and Elliot Patching… Former team mates pitted against each other in new rivalries!

These Rumble competitions always have ingenious and usually bizarre themes, so it’s not just a fitness workout but also a history lesson! This one was about Mayans, or was it Incas… Not sure, basically folk that lived in jungles! Sorry Dave, your lessons are wasted on me, I’m an idiot! But I do like to get involved, and have some fun with the team names, so me and Kez were team ‘Puma Tiger Sandwich’, and Elliot and Leanne were team ‘Paraquet Toucan Salad’! When our animals join forces, we have mighty powers! On a lunch menu!

Today started gloomy as, and not even that warm. Brilliant! It’s an outdoor competition, in July, and Summer can’t be bother to come along. Add to that the ground was a minefield of potholes and cow poo, and things looked like it might be a miserable day… Luckily that was not the case!

The first event, before the main pairs thing, was an individual race. Now all through the day there would laps of a course, about 1km in length, with obstacles, like hurdles, a wall, things to crawl under. So the first call of the day was a standard race for everyone, get some individual points, and learn the course! Or in my case, learn which way to turn once I’d managed to go wrong! I’ll be honest, felt like absolute rubbish on the first race, being quite fat at the moment means I’m an even slower starter than normal, so I did horrendously in this, plus I had my first encounter with my one single low factor of the day, the balance beam. And as this was a lap circuit, I would have to fight this thing every lap… But it’s just a balance beam you know. A long thin bit of wood that you need to traverse. Say it like that and it seems harmless. Put it in a race in front of me and the gates of Hell open up and the heat from my hate and rage might turn the trees black. Anyway, crap running and a crap lap meant I did crap in this. Funny that!

Then it was on to the proper competition. A bunch of events, interspersed with laps of the obstacle race. You just kept going until you finished. I had a goal in my head of the old school measurement of victory, first across the finish line. Now there was a lot of points for different things in the day, including finding objects that were hidden around, so finishing first didn’t make sure of overall victory. But whatever! Bragging rights are bragging right!

So first thing to do was a 20 minute round of things. First ten minutes was a 25kg sandbag for ten cleans (floor to shoulder), then the partner would carry the sandbag around a marker and back, and repeat for points. Then the next ten minutes was one partner did 6 chest to floor burpees, then the other sprinted to the marker and back. I loved this first bit! I opted for the sandbag cleans, felt nice and clean (sorry for the crap pun!), then loaded the bag on Kez for her to carry… And that didn’t go so well for her! She’s carrying a chronic hip strain at the moment, and the uneven loading of the bag almost immediately set it off. Booooo! I feel bad because I should have twigged and loaded it on to her back across her shoulders rather than on one shoulder, but by the time we did that it had already began it’s painful song. But we still motored on this first bit, then on the switch Kez took the burpess and I took the sprints, and I felt great now! Just took me some time to warm up! Once we finished this bit we set off straight away for a run…

The first team run of the obstacle course didn’t go too well. Kerry’s hip was pretty bad and we walked a fair chunk of this. I didn’t mind walking, I figured we would just smash the events and just settle for a fun day of training with some pleasant walks in the woods! Still a shame though, as we would have been good for a proper good go at winning! After the first lap Kez swigged some painkillers, then it was time for the next event, which was partner carries. We had to do 20 carries, there and back. Now Kerry has a hip that is a bit screwed, and I’m a fat git right now so to me it just seemed logical that I did all of the carries. Luckily Kez is not too much of a fat chick, so I figured I should be alright! After about 5 lots of this, with 15 to go, I started to flag. I was sweating like a rapist and it was getting harder to keep a grip on Kez, it was getting really knackering. Then what happened? I don’t really know. Somewhere the ‘Mojo’ switch in me got flicked, and the harder it got, the more I enjoyed it… Oooh er missus! So I started to speed up, and just got faster! Kez commented that I was like a man possessed, but I think it may have been that I tapped into one of my inner animals, this time the horse, a bit like Power Rangers. Those jungle folk believed in that sort of stuff, didn’t they? So it seemed fitting I also got those powers! Staying in theme and all that!

Once we’d finished the carries, we’d actually made up a fair bit of ground on those ahead of us (seriously, I was well chuffed with my performance on the carries!), and it was time for Kez to do a lap on her own. I was worried about this, but she just went off running and seemed fine, so the rest she got sat on my back (including fun activities like covering my eyes, pretending to spank my ass to make me go faster, horse type stuff) obviously did the trick! Once she got back it was then another lap for both of us, and to be honest by this stage I really enjoyed the running, nice little break from whatever horrible thing is next!

So after that lap it was now time for some crawling. There was some low taut ropes you had to crawl under, then sprint a little lap. You had to do 20 of these laps but you could split it up how you wanted. I watched one of the guys ahead of me, Tom North, crawl under the ropes like he was Spiderman on speed. I thought to myself that’s how it’s done! So we split the work 2 laps for Kez, 3 laps for me, and I did my own best impression of Spiderman on speed, and I think I did a good job! Actually really enjoyed these crawls, proper went as fast as I could and it was hard work!

So after the crawls it was time for my solo lap of the obstacle course, the only lap where I really lost my mind at the balance beam and took the forfeit of burpees as I was getting so angry I thought my head would pop. Then once back it was another lap for both of us, then the final event, the ‘Sacrifice’…

One of us had to do 100 push ups, and one of us had to do 20 lengths of bear crawls. Kez is wicked at bear crawls and I’m ok at push ups, so it seemed logical who was doing what. At this point in the overall race me and Kez were in the lead, with Leanne and Elliot close on our tails. I started my push ups, got to about 50, and then felt like my head was sat in an oven. I had Kamran (bless him!) rubbing my arms, Kerry pouring water on my back, bit like a spa day haha! But then Elliot rocked up and started his push ups, and blimey he was motoring! So I got back on the horse, but I only managed to finish ahead of him by a couple of reps! Fair play lad! Then it was Kez on the bear crawls, and this was really tough. I think it was Sarah Greene that clocked the distance of these crawls at half a mile! Half a mile of bear crawls! And it was on a hill, so half of them were downhill, and that’s not pleasant! I did my best to give Kez a guide by walking in front of her, and also keep spirits high by taking the mick and generally insulting her along the way.

Once these were done it was just three laps of the obstacle course to finish the whole damn thing! So off we went! And with a nice consistent pace we were the first team to the flag! So old school bragging rights were in effect! Elliot and Leanne were the second team to finish, not long after us. I think we finished the entire event in roughly 2 hours and 20 minutes, and Dave had put a 5 hour limit on the whole thing, so I was happy to be well inside that! But even though we were the first team, it wasn’t over yet… Because this was a points competition, not just a race!

So after waiting for everyone to finish (and there was some really HUGE efforts by some of teams to finish, just gutsy stuff, really impressed with some people’s heart!) we got the results….

In the individual categories I somehow managed to come 3rd, I think because I hogged all the piggy backs for myself, with Tom North winning the individual Men’s with an amazing display doing a huge amount of work! And Leanne did wicked coming in 2nd place in the ladies, behind Debbie Keating, whose turning winning into a habit!

Wait, what? How many points? FIFTEEN POINTS?! 1 PERCENT! You have to be kidding me!

But seriously, fair play! It was always going to be close, and it was a wicked competition, a lovely day out! I think today was my favourite Rumble competition to date, and the trophy they won was an awesome skull! I wanted that!

So thank you to all the judges, the organisors, people being generally lovely, my amazing partner in crime Kez, and Leanne and Elliot for a wicked tooth and nail fight to the very end! But one thing…

WE WERE THE FIRST ACROSS THE LINE! HA!

I’m not a sore loser, honest!