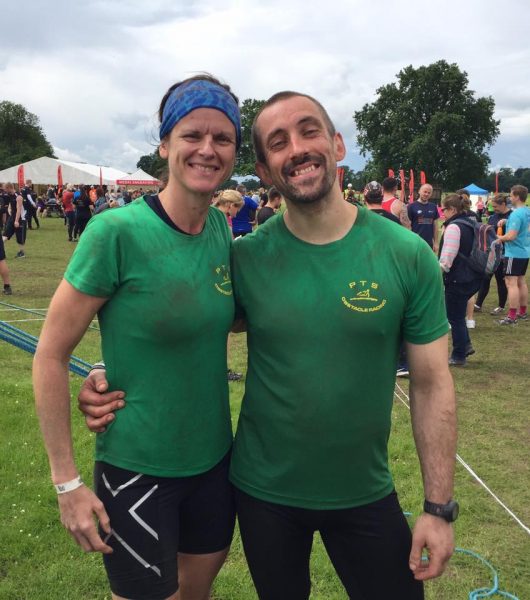 Kerry Gowen had persuaded me to take this on as a training tester to see how I operate over two days of hard racing in preparation for the stupid stuff we’re doing in September involving mountains and obstacles and things.

Kez had never done the Suffering races, despite having done pretty much everything else, and I’m still a newbie to all this crazy stupid stuff, so all we were expecting was kind of what people had said, that it was horrible. Hence the name.

So imagine our surprise when we finished yesterday’s races feeling wicked, absolutely buzzing, having had an absolute blast!

The first race, the 5km, started at 10am yesterday. Everyone set off, then after maybe 400 meters we hit a massive queue for some walls. Oh no… Every racer’s nightmare is these queues! Not a fun way to start the race. Then it was straight into a narrow muddy stream that was single file, really slow and annoying. Well this isn’t looking good at all!

Then after this we had our first encounter with the ‘Reapers’. Now these guys are everywhere in the race, and they give you commands of exercises you have to do before you can carry on, like 20 push ups, 10 burpees, 20 star jumps, 30 sit ups… You get the idea. Sounds not so fun… Well actually it was really cool! I enjoyed the break up in everything, and it never seemed too much or overkill.

So after a slow start everything picked up nicely! I can’t really remember too much, because I’m a bit like that, but the 5km race was really, REALLY fun! We finished that race in about 1 hour and 10 ten minutes or so, Kerry about a minute ahead of me as usual! Kerry was also the first lady back, so as usual killing it!

So a little break and then we started the 10km race at 12pm. Again, the slow start but we were prepared this time and made sure we were at the start of the wave to see those queues off! We finished the second race in about 2 hours and 10 minutes, again Kerry beating me by about a minute, and again being the first lady back! I have renamed her ‘Robobitch’, and rather delightfully it seems the name has already spread!

Because I can’t really recall things in order, I’ll just talk randomly about the things encountered over the first two races.

Absolute stand out moment in the 10km was the rig! Now a lot of races have rigs, and a lot of times it’s just a case of upper body heaving through swinging and hanging. Not this time! A full body outright puzzle to progress from one stage to the next! Ropes in all directions, rings, random bone things, balls, cargo netting, it was amazing! Flat out the best rig I’ve ever seen! It was REALLY satisfying to complete, especially when you’re dangling in the middle without a clue how to move! Kez went before me on the rig and just flowed through it, like she does, which just made me feel more of a lump, getting tangled and spinning around like a drunk monkey! But whatever, I managed it, somehow!

Now the Suffering races are known for their hill relays, which have you just going up and down a hill for quite a few lengths. and in the 10km race there was a nice big one! Now hills are a bit of nightmare for me, I haven’t yet got quite the technique, so while I can run up hills, I just go really slow. It’s annoying actually, especially when people like Kez run past you like they’re Legolas! But this hill relay I just thought about the rhythm and plodded away, and it wasn’t that bad! Quite enjoyed it actually!

Another interesting feature was in the middle of an early hill relay, because it had a slide. But first they squirted detergent on you! And a nice big foam pit at the end of the slide! Sounds like fun, right? Well it was! But then, you finish running down the hill, then run up the next hill length and there is a nice 8 foot wall to climb over, absolutely covered in soapy foamy bubbly slippery goodness! It was strange, I think it should have annoyed me but I enjoyed the challenge!

Another absolute stand out moment was the very last thing you had to do… there was a very tall wall with a rope to get over, you jump down off that, turn around… And there is the finish line! But between you and the finish line is four massive rugby players, each with a scrum shield! Who remembers this off Gladiators?! On the 5km race I felt a wonderful surge of aggression, let out a nice battle cry and charged those guys with intent to kill! I hit one so hard… And it was like hitting a force field! I flew about six feet in the air, landing on my back hard! Haha, it proper winded me! Those lads thought I was done and were willing to let me pass, but no way! I charged again but they played soft this time and let me barge past, bless ’em! On the second race I played a bit smarter and pulled a dummy move to create a gap and cheekily sneaked through!

So after the first two races had been finished I felt great! They had been an absolute blast, really good to run through, excellent pacing, great obstacles, even the Reapers were really fun! The music in the event village was banging too so I constantly felt the urge to boogie!

The second day was just the one race, the long one. I woke up feeling ok, having had my post race recovery treat of a whole chicken and a tub of ice cream, so I was excited to see what was in store, and to be honest just enjoy it all over again.

Oh dear. It didn’t work out quite like that.

So the first 5 miles or so were good, I was running solo and feeling good, then I hit the long hill relay from yesterday, only now it was while carrying a sandbag. I couldn’t run whilst carrying the stupid thing because if it hit the floor you had to do 20 to 30 burpees, and the ground was steep, slippery and a bit treacherous. So it was just a grind. I looked over and saw Kez a length or so behind me in an adjacent lane and she said out loud what I was thinking: “BORED!”. And it was. It was boring. No doubt some of you heroes will be going on about how ‘tough’ it was, but let’s be honest, it was tough because it was boring.

So after that, and it took a while, I wanted some company so I could bitch and complain, so I waited for Kez to finish and we then proceeded to whine and moan like true grumpy gits. And we hadn’t even got to the worst bit yet!

So then a bit later there was another sandbag carry, just a pointless enormous detour round a field with this sack of sand. What a pointless exercise. One of the marshals asked rather innocently ‘How’s it going?’ and got a full dose of how bored and annoyed I was. Bless him, it wasn’t his fault but he apologized anyway. The marshals were great throughout by the way, so yes I’m a total moody grump for giving him general grief!

And then another total bore fest add-on to the race, an entire section of really slippery mud in a very hilly high-angled bit of woods. It was utter rubbish. At this point me and Kez were discussing the realism of just sodding the whole thing off and walking off home. Someone said to us that we should ‘think of the Legend status’ (which you get for doing all three races) and I’ll tell you what, neither of us give the slightest of cares. I don’t do these races so I can tell some random idiot on facebook I got a medal, I do them because A) I want to test and express my physicality, and B) I want to enjoy myself! If some silly sod told me I’d be an internet hero if I scraped my nails down a wall for eight hours straight, I’d just call them a idiot. End of.

So miles 5 to 9 of this race were awful, no other way of describing it. People might want to harp on about ‘mental toughness’, well you can do one you silly sod because I finished the race. I just really, REALLY didn’t enjoy the pointless boring middle section. There was no real testing of athleticism in this bit, just a tolerance of how stupid life can be.

But then once we got to the final miles, it became fun again! We both felt our mojo return, things became enjoyable and I no longer wanted to commit murder most foul! So all that stuff in the middle of the race should just go away!

My last battle with the rugby lads went on a bit haha, because I wanted more action! I had some frustration to vent! We finished the third race in about 4 hours and 10 minutes, and to be honest I’m pleased with myself! I’ve never covered this kind of distance before in a weekend, and yeah I’m tired and I’ve got a ton of bruises but I’m completely unbroken! So some questions have been answered for me which is nice, especially the boredom thing. Was I bored because I was tired during my third race? No, because my mojo returned. It was just a rubbish bit of the race.

Which is a real shame, because the Saturday’s races were wicked, just spot on. It felt like they had a near perfect formula, then took a massive dump on it for the next day.

So take what I’m saying as you will. I know these guys work hard blah blah blah, but they had something really good and I feel maybe messed it up due to peer pressure? “Oh let’s make things hard, just for the sake of it!”

Anyway, enough moaning! Saturday was amazing and I’ll absolutely be going back for the shorter races. Kez is a machine (called Robobitch!) and I can go for even longer than I thought!

Oh, and here are the results!

So some amazing results there! Kerry is the Suffering Legends Female Champion! Plus Kerry and Linda have qualified for the Obstacle Racing World Championships with these results too! And an extra shout out to Mark because he’s never run that distance before and seriously doubted he would make it! We didn’t doubt it though!