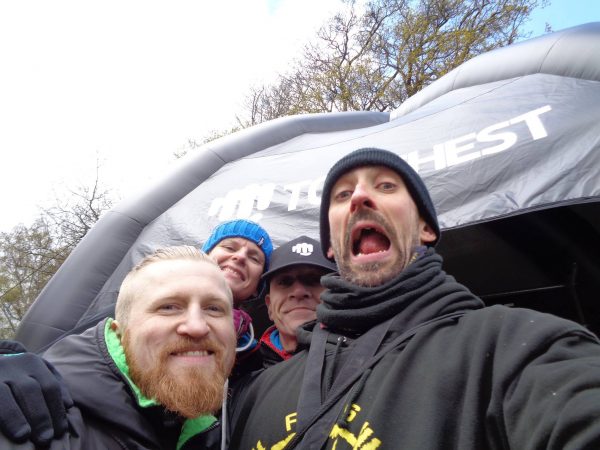 Headed down this morning with Kerry Gowen, Dave Loveridge and Viktoras Kamarovas for a nice early start to what was being hyped as an ‘Uber Obstacle Race’, the invasion of an international brand for the first time on UK soil…

And I have to admit I have some mixed feelings afterwards. Don’t get me wrong, I had a really good time. The race was well run, the obstacles gave an amazing array of challenges with ‘normal’ and ‘fast’ lane options, with the fast lanes being a more advanced take on whatever was being presented, if you completed that on your first go you had a free run ahead of you. But if you failed your first attempt on the fast lane you had to do a penalty run, sometimes with a carry as well! And if you opted for the easier normal lane, even if you completed that you were still penalized but with a crawling obstacle or a series of barriers or similar.

And I think this worked amazingly well. It was a totally fresh and workable way to stop the usual mess that happens at obstacle races. There was still some queuing, but considering there was 4,000 racers over an 8km course going in 5 minute gaps for the starting waves I think this system was absolutely brilliant.

The obstacles themselves were good and challenging, I failed quite a few of the fast lane options so had a lot of penalty runs haha! Some of the failures were to the usual nemesis of slimy muddy hands, I had even brought some chalk to try and combat this but I found that as I was going up for the obstacle I didn’t have the time to get the stuff out without causing a queue myself! So I need to think about my strategy on this one!

But I think there is a bit of disappointment in here, as we were expecting truly spectacular (well I was anyway, thanks to falling for the hype machine!) obstacles, which didn’t really materialize. I was expecting 40 swing rings in a row, I think there was about 10-15 (although these were the BEST swing rings I have ever done in a race, others races take note! THIS is how you do them!), just little things like that. So while it was a really good race, and it should hopefully give some other race designers some good ideas and kicks up the backside, they may have fell pray to their own promotional abilities, which is a shame as people will focus on what they didn’t deliver rather than what they did. Because what they did do, they did very, very well.

As for my own race, I have mixed feelings there as well. I started feeling great, felt like running like Forrest Gump at the start, then hit a queue really early on that was the worst I encountered for the whole race, then fought my way across a pretty challenging obstacle that was part climbing wall, part bar shimmy, then a really horrible rope hold sideways traverse thing, only to have my feet slide out from under me at the last foot or so and touch the floor, meaning I had to do the penalty run as well. Well that narked me right off haha!

And then after that I found it difficult to get my gears back on track. I felt very ‘stop and start’, and I can’t really blame the race for that because apart from that first queue it was pretty smooth sailing

I have found obstacle racing has been very mentally challenging for me over the last few months, more so than the physical challenge (and it is pretty damn physically challenging!), discovering things like an enormous fear of going down firemen’s poles for example (queue dodgy jokes), which now I have discovered I have worked on and am proud to have overcome. But today brought a new demon to the fore…

The Dragon’s Back. I’ve watched videos of this and thought ‘Easy!’, I looked at it today and had no reservations whatsoever… Until I got on it. The Dragon’s Back is a strange obstacle, a series of jumps that are quite high up, where you leap from structure to structure, catching yourself on poles and pulling yourself up before leaping to the next one. I have heard the stories of experienced obstacle racers literally being stuck for sometimes hours, in tears, over their inability to just jump for it. And I got stuck…

It took me two attempts just to run up the damn thing to get to the top of the first platform, and then I just froze… I couldn’t get myself to jump. Umm. I was watching people just stream ahead of me, and I knew I could easily make the jump, but that stupid inner doubt was pounding away in my head. I nearly climbed down the ladder and took the penalty, I was absolutely petrified of that first jump. I don’t know how long I stood there but it was in the multiple minutes realm. At times like this I have to weigh up the fears. I have a fear of the jump ahead of me, but I had to materialize a bigger fear and solidify it in my mind, and it wasn’t a fear of failure. It was a fear of not trying. A fear of not actually knowing what I was capable of. And that fear spurred me on to finally make that first leap. Which when I finally did, was a piece of cake. I then did the next five or six jumps in a row as easy as pie, and got on with my life! Afterwards I found out Kerry landed the first jump on her bloody chin (with a beautiful bruise to show for it), and she just kept on going regardless!

There was such a variety of obstacles I can’t remember them all, swing bars, monkey bars (I didn’t end up going for the flying monkey bars, I had no confidence in my slimy hands at that point of the race), rope climbs, farmers walk with pretty heavy jerry cans (loved that haha!), walls, some beams, there was a sternum checker (a beam you have to jump on to with your belly and over) that was really nice. While I was waiting to go on the sternum checker the girl in front of me in a red t-shirt got stuck, no wonder because she was tiny, but she still gave it a really good go, so I clean and pressed her over it for my act of chivalry for the day. She then promptly overtook me on one of the downward hill sprints (which were wicked! Why the hell would you WALK down these?! You lazy unfit people! It’s a downward hill! Gravity puts in more effort than you do!) which I complained about the unfairness of her weighing about 50kg! Haha, win some, loss some!

The running terrain was really quite awesome. The hills went on for absolutely aaaaaaages, but it made me a bit mad that I would get to the bottom of a hill, look up it and see nothing but racers walking up it. All of them! For crying out loud we’re not tourists! I admit I didn’t run up the hills very fast but I was too determined not to be beat by a bloody hill! I clearly have anti-hill-walking rage issues.

When I finally got to the swing rings which I think were towards the end, I was mentally prepared for a mighty swing fest, and I’ve always done really rather badly at these in other races due to the usual problem of wet hands, but these swing rings were wonderful… Canvas wrapped or something, they had grip! Ah, the joy! I took my sweet time on these, actually just relaxing and swinging back and forth, no rush, just truly enjoying the flowing through the air. Then tiny lady in the red t-shirt was alongside me again, complementing my ease of technique (who were you? I wish I had asked your name!)

Alas one of the other swing ring type obstacles I really wanted to have a go at I didn’t fair so well, which was the spinning wheels, just like the ones on Ninja Warrior. They looked awesome but were greasy as all hell so I hit the deck halfway, and on the ninja rings that you have to move the rings over pegs I got cramp in my hamstrings halfway across and had to bail, and that happened on the bloody peg board too! They were right at the very end of the race but I hadn’t felt any issues in my legs until I was suspended in mid-air!

One thing I really surprised myself with and was very pleased with was the running up of ramps. There was quite a few ramps, and apart from the start of the Dragon’s Back I managed to do all the ramps first time, included the what looked enormous one at the very end before the finish line. I don’t like ramps because I’m a bit slow, and my shoes are slimy, but the last ramp was wicked… And it even finished with a fireman’s pole which I went down no problems! Ha!

I finished the race in 1 hour 35 minutes, think I placed about 491st out of 4,000 racers. The others did well with Kerry getting 1 hour 33 minutes, Dave getting 1 hour 26 minutes and Vik flying round in 1 hour 11 minutes! Everyone faster than me haha! So all in all I had a really good day. I learnt some more about myself, got some things to work on, and am looking forward to my next race! Which I think is Iron Run on 14th May…