PTS at the Rumble Fitness Masters Of The Sea Competition! 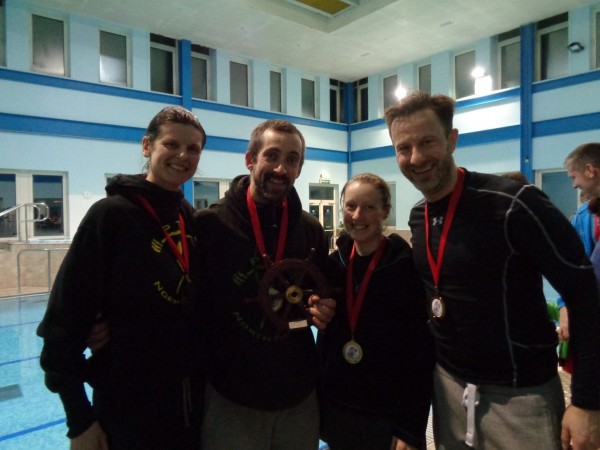 Ahhhh, a slightly better result today (Sunday 13th March 2016) for me and my amazing team than last weekend! The Rumble Fitness Competition ‘Masters Of The Sea’, a four person team event, the PTS team was me, Kerry Gowen, Leanne Cliffordand Ali Crooks…

Yeaaaaaaaah boy! It was a long day, and I would say it was hard but to be honest I loved it and felt pretty damn good every second!

As per usual Dave Peters and the Rumble crew did a top notch job, again very innovative, very creative, well run, well organised, and just nailing that special thing they have of weird themes for general fitness but it all just makes sense when you do it! Seriously, I love what these guys do!

Event 1 was an individual competition, a bit shorter than the other rounds, you had to do 2 and a half minutes of kettlebell clean and press and then immediately 2 and a half minutes of shuttle runs with a jump, a duck and a jump over an annoying flimsy hurdle, which a gust of air could knock off, which is part of the ‘fun’, because you have to reset the silly thing if you knock it off. I hate bamboo! I enjoyed the kettlebell bit, didn’t enjoy the hurdle so much… Don’t know our individual scores but our combined team score had us second in this one.

Event 2 was a really fun one, lots of SPEEEEEEED! You had three stations, a flat sprint, a barrel carry, and then a sprint with a duck and a jump, continuous for 20 minutes. Because there was three stations and four people, you all gradually rotated round the stations. This was wicked fun! The sprints were so fast you actually didn’t get much rest at all, but we all motored on this one and got the event win!

Event 3 was always going to be a PTS favourite… Deadlifts and farmers walk! The farmers was a bit funky though, with one side being a sandbag and the other a kettlebell on a chain with a thick PVC handle! The deadlift was also on a bar with little cute plates, so quite far down to go! All the tall people complaining hahaha! The format was quite grueling actually, you split the work however you wanted, but you had to do 50 lengths of farmers, then 150 reps of 40kg deadlifts, then another 50 lengths of farmers, then as many 50kg deadlifts in the remaining time of the 20 minute round as you can! We argued a little over strategy on this one, and then what we agreed went out the window anyway haha! We did 2 or 3 lengths of farmers each, then on the deadlifts I just blasted away… I even got a bit vocal and to my eternal shame we bent the barbell… Sorry Dave! But still, we smashed this, got something like 160 deadlifts on the final one and got another event win!

Event 4 was an interesting one… With the team split into two pairs. One pair took on a max distance row between them, while the other pair did then minutes of alternating zercher carries and then 10 minutes of rope pulls and drags. Me and Leanne did the carry and rope and Ali C and Kez took on the rower. Kerry and Ali won the row with an amazing performance and the only pair to crack 5,000 metres in the 20 minutes! Me and Leanne came second in the carry and drag, and at this point my biceps and forearms are telling me to sod right off!

Event 5 was more SPEEEEEEEEED! This time you had four objects, a 30kg smooth barrel, a 25kg sandbag, a 12kg kettlebell and a 10kg handbag of plates (yes, really. Well not an actual handbag but kind of. Just go away and watch the video!). You then had to race laps while carrying the objects, and it had to be in the set order. We decided we would stick with the same objects for the same people, I took the keg, Ali C took the sandbag, Leanne took the kettlebell and Kez took the handbag. We started off and settled into our rhythm, we were second for a long time, but then the team in the lead got tired…. And we didn’t. So we started to catch them, and then we overtook them, and then… Kerry got accidentally wiped out by someone running into the back of her feet. She didn’t see it coming and hit the deck hard. At first it seemed really bad, like a proper injury, she couldn’t move her leg properly, she’d cut her knee and elbow, and she had a hole in her tights! But then she decided that it was a competition and not a sympathy rally, got back on the figurative horse and kept going! So in the end we came second on this event, but we should have won this one too!

Event 6 was the swimwear section! Yes, we headed to the pool for a bit of watery fun! Two main reasons I wasn’t looking forward to this. One, I’m rubbish at swimming. Two, I’ve gotten fat recently and am not proud of ruining my figure. But at least on one count there was no real worry, as there was two parts to this. There was the swimming bit, which Ali C and Kez took on, and then a paddling bit, which me and Leanne took on. The paddling was funny as! You had to lie on a lilo and paddle like crazy! I was good in straight lines but screwed up the steering haha! But proud of the fact I didn’t fall off! Kez and Ali C smashed the swimming, and multiple people asked the question “Is there anything Kerry isn’t good at?” I’ll be honest, I don’t know! Anyway, we won this event too, although that would be down to the swimmers and not my paddling hahaha!

So there you go! An awesome event yet again, I’ve had wicked fun, got an awesome ship steering wheel trophy for the gym wall, and my team ROCK!

And here’s some video!