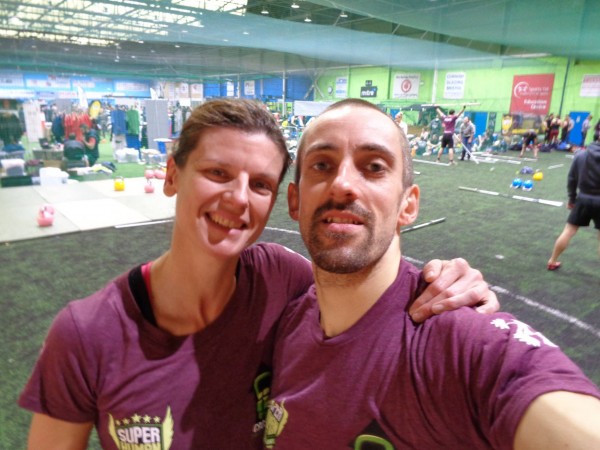 So today I competed in my first crossfit competition…. Shhhh, don’t tell anyone!

Went to Bristol with Kerry Gowen to the Fort Ashton Throwdown after Paul Croft asked me very nicely if I wanted to lose my crossfit virginity with his event! I find it tough to turn down what feels like a challenge…

It was a mixed pairs team event run by the same crew that run the Superhuman Games, so as expected it was incredibly well run with precise timings. Paul is also a lovely host, and no he didn’t bribe me to say that!

So why the fuck am I doing crossfit? Well why the fuck not? I might not train in it but fuck it, it’s competition and I fucking love competition! Plus I got to drag Kerry into it too, she also doesn’t like it, so a right pair of grumpy twats got to bust their crossfit cherry!

The format was three events and then the top ten teams go through to a final, there was about 185 teams on the day, so top ten would be some going! There was no way in hell we were expecting to make the final, but we wanted to go down and have a go and see how far approximately one training session in this stuff would take us!

The first event was 8 minutes to find a max on a barbell complex of one power clean, two front squats and three shoulder to overhead. I wasn’t really looking forward to this, I’ve had a shitty right elbow sprain which has fucked up my front rack position for a few months now, and it’s only just got better enough to hold a bar like that in the last couple of weeks (pussy excuses, I know), but whatever, right? Kerry did really well and managed to get 45kg, I however only managed 75kg and failed the third overhead rep on 80kg, which is shit! Our score (which was our total) was 120kg, pretty shit I do believe. Some of these guys were putting up 130kg on this, I think the winning total was about 195kg!

The second event was a fifteen minute round of an ascending ladder of three exercises; front rack lunges of 60kg for me, 40kg for Kerry (hold the bar like a front squat, lunge forward until back knee hits the floor), kettlebell swings, 32kg for me, 24kg for Kerry (normal Russian style, up to eye line, and thankfully not the fucking stupid American style) and then hand release push ups (start at top of push up, lower chest to floor, lift hands off floor, then push back to start position). The scheme was two reps of each, then four, then six and so on until the time limit. You could split the reps and exercises however you wished…. Which worked out well for Kez, because the one downside to her wonderful long legs is that she can’t lunge for shit! She had a go but couldn’t do the weight, so it fell to me to complete every single one of those motherfucking lunges! My ass muscles started calling me a cunt after about 5 minutes! We had sort of decided that Kez would do the swings and we would split the push ups, the push ups were easy, but at one point I was still impressed with Kerry doing eighteen in a row! I thought Kerry was handling the swings with ease, she just had this look of half serene, half bored on her face, but turned out she needed a little back up, which took me by surprise! You need a better effort face Kez! We managed to get into the 20’s on this, but we think the winning score was somewhere in the 28’s! That’s fucking horrendous! My bum muscles are not going to forgive me (or Kerry) for days! The score was total reps, so we got about 276 I think, the winner getting 570!

The third event was a 12 minute round, two minutes alternating each partner of first twenty burpees, and then barbell thrusters (40kg for me, 30kg for Kez) until your two minutes is up. The score was how many thrusters you got, so if you didn’t finish the burpees you scored zero! To be honest the burpees were fairly easy, we seemed to finish them before most people, but the thrusters (because we don’t do that shit) were a bit of a mess. I think Kez got 5 in her first round, I got 12, then she got 3, I got 6, she got 3, I got 6, she got the hump! Kerry is not a fan of things she’s not good at, so she proceeded to announce her hatred for all things crossfit and then retired from all future crossfit competitions, forever. Which I think lasted until the car ride home, where the next competition got into the discussion haha!

So there was no way in hell we made the top ten, in fact I don’t have a clue where we came, I think after event 2 we may have been around 60 something out of 180 something teams, but because of the long journey back we fucked off! So I have no idea at all on final standings, but hopefully that information will be out soon.

I did enjoy myself… I think Kez may admit to that too, some day. It was a strange sensation though, as the competition didn’t really feel like it touched the sides, and apart from the horror of the lunges (thanks again Kez, you dickhead!) it felt like a bit of a warm up. Is that what crossfit competitions feel like generally? I have no idea. It just wasn’t anywhere near as traumatic or demanding as obstacle racing, strongman, powerlifting, or general fitness stuff like the superhuman games or the rumble series. Maybe because we didn’t go fast enough? Probably need to get used to the format a bit more before we actually get a workout!

So all in all, a very well run event, nice atmosphere, a bit of a sweaty giggle, am I now a crossfitter? Of course I’m fucking not. But will I compete in it again? ….Yeah, think I will.

Next time in bra and hot pants?