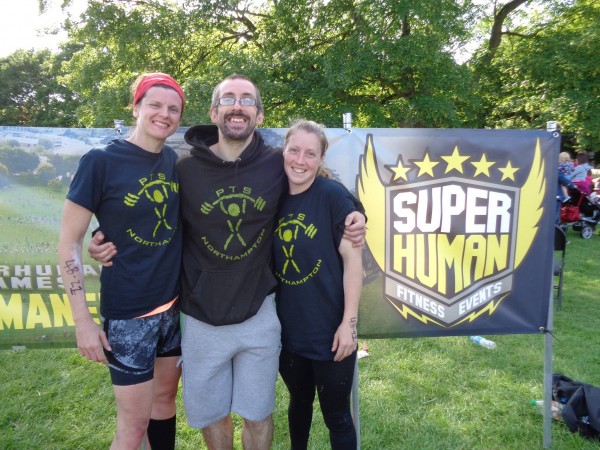 The Superhuman Games is a large scale fitness event held in Bristol. It comprises of 5 events, typically 20 minute rounds where you have to do as much as possible. It’s run as same sex pairs teams with divisions based on age. I believe this is their third year of running the competition, and it’s our second year of attending.

The PTS team this year was Kerry Gowen and Leanne Clifford. Leanne competed last year with Pj as her partner, but Pj wants to stick with powerlifting and strongwoman so Leanne needed a new partner, so in comes Kerry! Now Kerry is actually technically a master or veteran, meaning that she’s old, but the divisions in this competition are based on the average of both people, and because Leanne is a bit younger, Kerry had to compete with the not so old in the 18-39 years old ladies division.

Kerry has been on a good tear recently, only just narrowly missing out (by one point!) on taking first place in a national obstacle racing league, but this kind of competition is a rather different experience for her. Leanne has also been doing very well at obstacle racing and has also been competing in powerlifting, but only a few weeks ago she had quite severely strained her soleus muscle and wasn’t fully recovered yet. Hopefully she would get through this in one piece! Leanne may be a quiet lass but in my opinion she is a fucking terminator. There doesn’t seem to be any stopping her. Don’t get in her way!

The competition itself is pretty big! I think this year they had 600 competitors, with the girls going up against 75 other teams in their division alone! One thing I have to say is that just like last year, the logistical organisation of the event and time keeping is quite simply the best I have EVER seen at any event of any kind, ever. If you’re going to learn about event organisation, study these guys.

Last year they had the event in October and it absolutely pissed it down with torrential rain for the first few hours, so this year they moved it to June, should be a safe bet, right? With the event due to kick off at 9.30am, of course rain clouds gathered overhead and then it started to fucking rain. Luckily it only rained for a few minutes and the sun was out so everything was dry, but there was a right bastard fierce strong cold wind that didn’t let up the entire day. I had my hoodie on with the hood up all day long! And I still got a sunburnt face, because like a twat I forgot to put on sun cream because I was fucking freezing from the stupid wind. Stupid weather!

We met up with some people that the girls had previously done some races and training with from Milton Keynes, lovely bunch from Energise Mud Runners. Also bumped into some people I had competed against in other competitions, always nice to see friendly familiar faces.

One thing we were all a bit apprehensive about was going to be the sheer amount of crossfitters all collected in one place. Crossfitters, just like potentially other large groups of like-minded people like powerlifters, strongmen, hip hop fans, heavy metal fans, rugby players, football players, etc are total knobs when gathered. But thankfully there was actually quite a diverse crowd of crossfitters, obstacle runners, military types and general folk and it was a really nice atmosphere.

The first event of the day was the Assault Course, which was a lap of a course with obstacles that was about 400 metres long. The obstacles were things like bales of hay to climb over, balance beams, things to crawl under, stuff like that. The format was that in the 20 minute round you had to complete as many laps as possible, taking turns. I figured this should be a strong event going in, and I remembered that last year the winners got 6 and a bit laps so I told the girls I wanted 7 laps. They got 6 laps, and Kerry wasn’t particularly happy with her performance because she is used to setting a pace you keep for 20 miles, not sprinting in 3 minute laps! But their performance still got them 8th in that event, so that is pretty fucking good!

The next event was called Strength & Honour and comprised of 60kg deadlifts using a wooden pole put through breeze blocks which had to be done for 5 reps each person, then they moved on to hitting a tyre along the floor (long grassy floor, so barely any sliding at all!) for 2 lengths, rinse and repeat as much as possible in 20 minutes! The deadlifts were easy and not the problem part of this challenge. The sledgehammer and tyre was just a grinder, but the girls got it easy compared to the guys I think, as the guys tyres were not just heavier but also had a broader base, meaning more contact with the wonderful grass, meaning guys just getting all emotional and frustrated at the bastard thing! The round was scored with a point for each lot of deadlifts, and each lot of whacks, and the girls came in with a score of 20 and an event placing of 23rd. Not bad, but I think more practice playing ghetto croquet is needed!

The third event, and thankfully the one just before lunchtime was the VO2. This was 20 minutes of one athlete doing a 300 metre row on a concept 2 and the other doing a 150 metre shuttle sprint, with the athletes swapping after 10 minutes. The wind on the day was so strong that the marquee tent the rowers were under had it’s support beams completely bent out of shape! Leanne went first on the rower, and a steady solid pace was set. There was no sign of fatigue or slowing down and the changeover was a harsh one with Kerry having to finish her run and go immediately to the rower! So Leanne got a nice break! Keeping an eye on the time near the end I realised that it may be a close call getting in the final 300 metre row so that was when ‘Evil Loud Total Bastard Shouting Screaming Ali’ needed to make an appearance and ramp shit up several hundred notches! Kerry responded wonderfully and attempted to leave her soul on that rowing machine, it was for a time as if there not a single other competitor in the competition, just Kerry, the rower, the clock and my voice on an amp from Hell! The 300 metres was completed with seconds to spare and the girls had completed 7.5 rounds and that was good for 7th in that event! A truly epic display and well earned points!

After lunch and an opportunity for the legs to regain the ability to stand it was the fourth event, the Unconventional Beast. I was really looking forward to this event for the girls, I knew it would be a strong one! A 20 minute round split into 5 minute sections. The first and third section was alternating runs of 25kg each hand farmer’s walks, and the second and fourth section was again alternating seated rope pulls of a 15kg plate and then run the plate back to the beginning for your partner. Before it started we had a little discussion about what to focus on and transitions between partners and then it was game time! All I can say the girls absolutely fucking nailed it! They did not put a foot or hand wrong for the entire 20 minutes! They did not stop once, they did not drop or place the farmers down at all unless swapping, their transitions on the rope pulls were so smooth, it was just event performance perfection! Now I have an emotional style of supportive coaching and I tend to favour a quite profanity heavy style of dialogue, but at this event there was so many little people around (I mean children not midgets) that I was constantly having to censor myself mid-shout! But during this challenge I managed to get a moment with no kids in the vicinity and got in a nice loud bellow of “FUCK THE PAIN!” which got a ripple of laughter. I wasn’t trying to be funny! Anyway, the girls smashed it and they racked up a whopping 42 completed rounds which put them 4th in this event! Proud is not the word!

The final event was the one we dreaded the most, the Brutal Beatdown. This was 20 minutes non-stop of 5 flips of a 180kg tyre and then 10 burpees, jumping over a small step. The tyre could be flipped as a team, and the burpees could be completed by either athlete. Ah, burpees. I don’t care what anyone else says, I think burpees are fucking stupid. Burpees are just, well, pointless. Risk versus reward and all that. Anyway, the round started and the girls attacked the tyre flip with rhythm and co-ordination and just got through the burpees with steady efficiency rather than aggression. This was the worst feeling event for the girls and they got 30th in this one. It was the last event of the day and this was a tough competition so it wasn’t a surprise that they were starting to fade by this point. But they had made it through the whole day and were still standing (just)!

So overall the girls placed 13th out of 76 teams, with the difference between them and getting into the top ten then difference between literally a couple of reps in one of the rounds! So close! But even so, I’m so proud of what these girls accomplished on this day, they were unquestioning in their commitment and their ability to follow tactical commands, even under heavy pressure and extreme fatigue. The stuff champions are made of! I’m also very happy that both girls came out of the competition with no injuries, strains or anything unwanted, because at the end of the day you need to be able to get back in the gym the next day to train again! (In case anyone is curious, they did both take Sunday off, but they were both back training at PTS on Monday!)

I had a great day as well, and next year I might actually get to compete also! The Superhuman Games competition for 2016 is on the 28th and 29th of May this time and registration is now open! They’re doing same sex pairs on the Saturday and a new individual event on the Sunday, so if you’re interested have a look on their web page for next year’s event: http://www.superhumanevents.com/

And finally here is the video footage I filmed on the day of Kerry and Leanne. This video DOES NOT do them justice as I decided to film only at the start of each round because I knew I would need to get more emotionally involved later on and could no way film and give these girls what they needed at the same time! But you will still get a very good idea of what the competition is like and the level of fitness and mental strength required to do well! Enjoy!