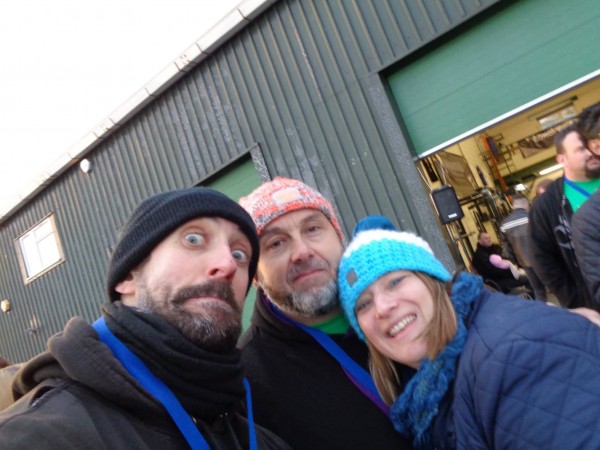 The Strongman Sanctuary Spring Competition, I decided (perhaps unwisely!) to go for the more advanced Inters U105kg category, went down with Emma Markham and Justin Green who was doing the Novice U105kg category.

And before anyone starts, no it wasn’t because of yesterday! In fact I felt great and fine and dandy and all that other energetic stuff, so no excuses!

The events were a quite of mix of the more exotic stuff, and I felt I could handle the heavier weights so it seemed right and just that I went in for the more difficult class.

It was a cold, moody looking day, with a hint of drizzle in the air. We turned up nice and early, I didn’t even need to weigh in because I’m a skinny fool, but I probably looked way bigger because I had so many layers on! Every time I turn up to the Strongman Sanctuary they have more new toys, crazy amounts of varied fun stuff!

Event 1 was a truck pull, about a 9 tonner. We were doing this one without a rope, so it was pure quad joy! Justin went up in his class and did really well, coming 4th out of 12! I bodged mine up with a slow start, when I watched it back I realised for some strange reason I tried to sprint start instead of push uniformly with both legs! Idiot! But I found my stride in the second half and sped up, but still only good for 7th place out of 9 in my class.

Event 2 was a really fun looking one, a 20 metre 120kg duck walk into three power stairs. For those of you thinking ‘What the hell is that?’, you have a weight with a handle on top you carry between your legs, then you have to lift it up a series of steps to the top. I had hoped my long legs would do me well here, but I couldn’t get the stride right and was very slow, then on the steps kept clipping the edge by about a millimeter. Came 8th on this, Justin also didn’t have a good time but I’m not sure where he placed on this.

Event 3 was a keg toss! Awesome! A series of five kegs weighing 10kg to 15kg you had to throw over a fourteen foot frame! Actually I was really nervous going into this, never done it before! Lots of the bigger, heavier guys made it look ridiculously easy, I think the fastest time of the day was around 10 seconds! Insane! I managed the first four kegs and then couldn’t get the final keg over, again on watching it back I saw that I had the height to clear it but I was standing too far away, and not strong enough to make up the difference! So last place for me on this one! Justin had a battle with the fourth keg which he eventually won, but as most guys got all five he placed near the bottom on this one too.

Event 4 for me (and event 5 for Justin) was the atlas stones. 90kg, 100kg, 110kg, 120kg and 130kg all loaded in a circle to 4 foot rings. I was intent on getting all five as I had done 120kg previously without too much hassle, so was looking forward to feeling the 130kg! As I came last on the keg toss I was up first for the stones… first three stones went up no problem, then the 120kg was next… What! It was covered in dust! I think it must have been brand new and unused, it was smooth and all the dust neutralized my tacky in one go! Damn! I tried several times and managed to get it move a little off the floor, but with no grip whatsoever it was a no-go! Damn! After my go they then spent several minutes wiping all the dust off it… Going first sucks! Justin had to load 80kg, 90kg, 100kg, 110kg and 120kg, I think he got the first four stones, but don’t know where he placed. I didn’t come last in mine as my first three were faster than someone else, but I think I still came 8th. Annoyed!

Then the final event for me (and event 4 for Justin) was the overhead medley. Now originally the event was supposed to all in order, but with time going on they decided to do the last two events together, so I had done the stones first, taken off all my layers keeping me warm, got covered in tacky, then spent ages getting the stuff off my hands and arms, to go straight into the overhead medley. I didn’t realise how cold I was… The medley for me was a 90kg log, 80kg axle, 70kg keg and a 65kg dumbbell. No way in hell was I getting the dumbbell up so it was going to be a race for fastest time to do the first three. Except… On the log, I slightly hurt my right shoulder. I managed to lock out my left arm but my right arm just stopped working, rather frustratingly about two inches from lockout. Damn again! I tried again but my right shoulder wasn’t playing at all. So a no-rep for me! Justin got all the way to the dumbbell but couldn’t get it, which was the bane of most people this day!

So Justin came 10th out of 12 and I came joint 8th out of 9, was a very different feeling competition with hard to practice events, which is what I liked! Just wish it wasn’t so cold today! Perhaps I should have done the novice…

Anyway, every day is a school day so I’ll learn from this and get better!

Oh and cheers to Emma for calling me and Justin names for not completing the keg toss!

Here’s the video of our efforts! Enjoy!