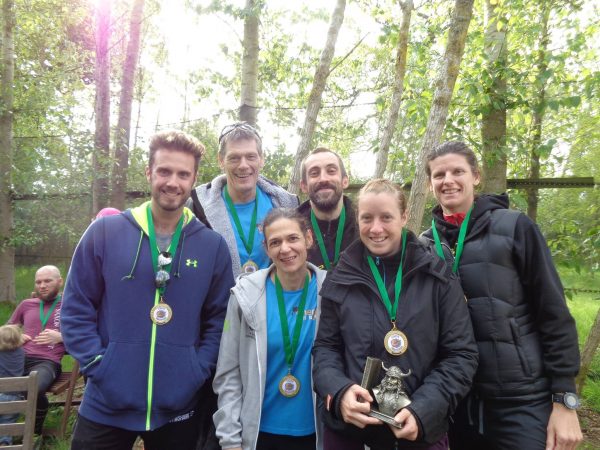 So Dave Peters and crew headed outside for the first time in this same sex pairs competition, and luckily the weather was lovely for it! We had quite a few PTS folk involved in this one, with the usual pairing of Kerry Gowen and Leanne Clifford, Mark Johnson was paired up with EMR dude Tony, Linda Johnson was paired up with EMR dudette Jen, and I had another new partner (seriously, am I that bad a partner? Actually, don’t answer that!) in Elliot Patching!

We turned up the venue at the Sabotage paintball grounds, saw some logs, saw some hammers, oh dear, what are we up to today then? As always the Rumble lot think outside the box in terms of lining up the theme of the competition and the nature of the tasks that lay in wait for us. They do actually give some events ‘leaks’ prior to the day but they’re so vague I’ve given up even looking! Teasing monkeys! Only thing I remembered reading that made any sense was that was some map reading, and I’m rubbish at navigation!

Event 1 was an individual event, but also your individual points went to your team total, so you didn’t want to slack! This was quite a simple event, but I loved the look of it! Basically it was run 2 laps of the field, maybe 600 meters a lap, and then do 30 sandbag rows, 30 log lifts overhead, a keg carry round a small course, and then one final run around the field. Fastest time wins! We lined up for the go…. And off we went! As per usual, I’m such a slow starter I got overtaken by loads of people, but whatever! I need to get my gears going so I just tried to reel it back and get in my stride. After two laps I could see the people ahead of me doing the reps, and this is where I should get some time back! The reps were nice and easy for me, and I was surprised to see so many people struggle with the log, but it was more to do with the awkwardness of it than weight. I did my bit and only had Elliot ahead of me by a few meters from the whole group! I desperately tried to catch him on the final lap but he was too fast! So I came second in the heat, and then Max in the second heat smashed us both for the event win! So I came 3rd with a time of 6 minutes 25 seconds. Elliot came 2nd with a time of 6 minutes and 19 seconds! In terms of team points this put us joint 1st as Max’s team mate Danny came 4th… Ooooh close! And also Leanne had a stormer winning this event out of the ladies!

Event 2 was a log flip, like a tyre flip, as many flips as you can in 20 minutes, splitting the work between you however you wanted. Not much of interest happened here, just two things: First, me and Elliot got 361 flips for 2nd place, and Max and Danny got 1st place with 369 flips. Beaten by 8 flips! Aaaaarrrrrggghhhh! Second thing, and much more entertaining, about ten minutes in I started to bake, so I took off my vest. I think a couple of other guys had already done this at this stage, but the second I had done this I heard Kerry start giving me grief from her lane of flips. I think she called me a ‘crossfitting p***k’ for daring to bare my torso. You see, Kerry has ‘rules’. She has rules about men in tights (shorts MUST be worn over the top), and rules about men going bare chest (NO). Now, here is the thing. I’m bad with rules. They get broken around me. I was boiling in the midday sun and I took my top off to cool down a little. Whoops, broke a rule. Now Kez is mad. So I called her a very naughty word and got on with it. Now to rewind a little, earlier this week we had had a little discussion about her revulsion at the obstacle racing thing of ‘muddy hugs’, which I agreed with. This must of triggered in my head because as soon as the final whistle blew I ran over and gave her a ‘sweaty hug’. Oh dear…. Breaking two rules in the space of ten minutes (actually three because I didn’t have shorts on over my tights) made the Grumposaurus appear to full effect. Genuine fear for my life meant that my own Twatosaurus also appeared, and the angrier she got, the more I giggled. And being told ”it’s not funny’ just makes it funnier! Full naughty school boy mode engaged! But now the day is over, Kez, I want to issue a full, public, grovelling apology for causing offence, so please don’t kill me. And if you wish to get me back with a sweaty cuddle then I shall take my punishment like a man and won’t complain! And for God’s sake nobody else think this is a good thing to copy, because not only will she kill you, I’ll get killed too!

Anyway, event 3 was orienteering. Map reading type stuff. We had a map of the area and had to find 8 objects. The only funny thing about this was Elliot about 2 minutes in nearly having a meltdown panic about being bad at finding stuff! We found 6 of the objects and came 4th in this one, and sweated not one drop.

Event 4 was a sledge hammer job. Hit a tyre with the hammer for one length, then using the hammer drag the tyre 3 lengths, for 20 minutes. I knew the rage was going to be strong in this one and I wasn’t wrong! My Gods me and Elliot were really rubbish at this haha! the tyre was going everywhere, everyone seemed to be much better than us at this, it was an exercise in getting really angry and still trying to focus on the job. Another 4th place in this event for us. Didn’t really feel any physical challenge in this one as we handled it so badly. Go away sledgehammer croquet!

Event 5 was deadlifts and running. Yessssss! After the last two events where we absolutely ruined the bed, an event that should be our bread and butter, right? The format was a team deadlift on a log, one at each end, and we had to do 15 reps, then we had a relay sprint around a lap of trees each before back to the deadlifts, and do this for 20 minutes. So we started lifting, and everyone went storming off ahead of us! Errr, what the heck? We’ve got rubbish at this too? Arrggh! So what followed was 20 minutes of the most relentless reps and just horrible feeling running, this event was just disgusting. I have no idea what my hamstrings are going to be like tomorrow, but they didn’t enjoy today! Me and Elliot just hammered away at this, and it paid off because we did enough for the event win and got back some dignity! Special shout out to Mark Johnson in this one, as his partner got a injured hamstring I think, so Mark did the event on his own, which meant he did 30 reps of lifting up one end of the log and then 2 laps of the running! And he kept that up for the whole round! Fair play Mark!

Sixth and final event was the hog carry. A sandbag on a beam that had to be carried on the shoulders of the team in tandem, and then run as many laps of a windy course as possible in 20 minutes. This was also horrible! The beam dug into the shoulders, it was just awkward and plus we were running the whole time so it was constantly jostling around. We did the first lap in 3 minutes and 16 seconds and I thought ‘Let’s do 6 laps!’ After 5 laps we had three minutes left…. I shouted ‘Let’s motor!’ and we went for it! Oh my Gods this final lap was horrid! Hamstrings were cramping, Elliot was complaining of cramp too, oh my word it was desperate! We got to the final straight and literally got to within ten feet of the lap line when ‘Time!’ was called… I was angry with myself! Ten feet! Everyone seemed to be swept up in the dramatic nature of our all out finish, and so Dave decided to give us the final lap…. Which meant we were the only team to do 6 laps and got us another event win!

Then final placings were called… We knew it would be close, and in the end me and Elliot came 2nd with 209 points and Max and Danny took the win with 218 points. So booo map reading and booo sledgehammers haha! But I gave it my all and so did Elliot, who was a wicked partner, so I’m happy with my performance!

Kerry and Leanne took the ladies win, as usual! But Leanne also won the individual competition at the start of the day, which was amusing as she had just been saying how rubbish she thinks she is at speed stuff! So double champion Leanne! Amazing stuff!

I had a wicked time as usual, love the Rumble stuff! I believe I have a sunburnt forehead now and so look like a fool. Cheers to everyone who made today possible, looking forward to the next one!