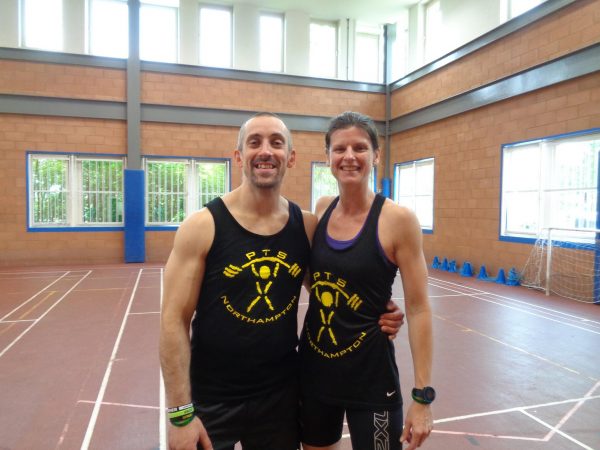 Another of Dave Peters and the Rumble Fitness crew’s events, this was promised to be a sick inducing cardio based contest, and it very nearly was…

Because I’m stupid, I ate way too much last night at Joe Decaro‘s 50th birthday barbecue bash. Because the food was lush, and it’s rude to not enjoy yourself. But I’m still stupid, and being aware of this stupidity somehow just doesn’t help!

So I went into this competition feeling like a sack of poo, just what you need! I pride myself on being well prepared for stuff, well nothing to be proud of today haha!

Me and Kerry headed to Milton Keynes for a not too early registration of 8.30am, with a kick off at 9am. To be honest I could have done with a few more hours before starting because birthday cake was still nice and fresh in my belly, but hey! These are the crosses we have to bear haha!

The Elite style of competition is an interesting concept, with an ‘elite’ person you have to try and beat as well as beat everyone else in the individual competition. Sort of like beating a high score. However, pretty much straight away after the first event I forgot about trying to beat the elite score because I was more focused on getting through the day!

The first event was a simple one: Ride 5 miles on a spin bike as fast as you can, then hop off and collect items in a shuttle sprint manner, all in the fastest time possible. I ride a push bike but am lost on a spin bike, does resistance work the same as gears on a normal bike? I have no idea, but I guessed it would all about RPM, so just kept it light and furiously made my legs go round as fast as possible! I tried to figure out if other people’s legs were going faster than mine, in a rather absurd attempt to measure progress, but in the end 5 miles was done, I hopped off, collected the items and came in 3rd place in this event. Not a bad start! I would also point out I made the neatest pile of items out of everyone, bunch of mucky pups rushing about!

The second event (without much rest!) was a ‘boot camp’ of bodyweight exercises. 20 minutes non-stop of squats, push ups, jumping jacks, chest-to-floors, jumping lunges, squat thrusts… Sounds grim but actually was quite pleasant. The format was working to Dave’s commands, with judges pulling you out if your form went. I enjoyed this, especially the paused push ups! And I’m not being sarcastic! I made to the end of the 20 minutes so came joint 1st place, and feeling good and fresh! This was not to last however…

The third event was a burpee ladder. You started every minute on the minute, and you had to complete burpees with a jump over a line, starting with 5, then increasing by one each round. This started fine, then at around 9 or so, I hit a wall…. A wall made of birthday cake. A wall some idiot (me) had built inside my own stomach. I actually thought I was going to throw up, so only made it to ten or eleven (about 5 minutes in) and then quit. I hang my head (and belly!) in shame. So I came around 9th or 10th here, not sure.

The fourth event was a shuttle sprint style bleep test kind of thing. You started with your chest on the floor, on the whistle got up, sprint to the other side of the hall, touch the line with your hand, sprint back and go back to chest on the floor. The whistle blows started at 20 second intervals, then every seven goes dropped by two seconds. Grim. Got about three levels in and Kerry next to me voiced exactly what I was thinking “This is not good for my hip!”. See we’ve both got some chronic hip/glute strains going on at the moment, from upping our running volume in preparation for the longer endurance events later in the year. The turning on the spot was really not feeling pleasant. Kez smartly pulled out before I did, but I went on a bit longer, again because I’m stupid, and just found I couldn’t go on. Not sure where I came but it wasn’t brilliant! Maybe 9th or 10th again. I found a kettlebell and tried to insert it in my glute. It was most painful! I whimpered.

The fifth event was just a straight forward run around a course in the hall, maximum number of laps in 12 minutes. Now normally I would absolutely love this, just up my street of pacing and relentless work, but I got two laps in and could barely run, stupid hip was not playing! So I pulled out and got last (12th?). Kez was fine in this event, so I should have been smarter in the previous event and pulled out sooner, might have made a big difference here! Every day is a school day!

The sixth and final event was another bodyweight style session. You had to complete 100 bodyweight squats, then 50 push ups, then 50 chest to floors, but running a length of the hall every 5. I figured this would be alright on my hip, and it was! Squats were ok, I think I just went too slow maybe, too used to powerlifting! The push ups I expected to be easy, but my shoulders were a bit blown! So these sucked a bit. The chest to floor bit was ok, but I just sorted of power-walked inbetween, but all this chest to floor action means I’ve scuffed both my knees! I think I came around 3rd in this, not sure.

So then overall Kez came in 2nd place, but there were only two girls competing! Debbie Keating came first, and a well deserved win! I came in 5th place which surprised me, as I messed the bed (and nearly my pants) on three events, but my big take away from today is to not be such a stupid idiot! Which I’m sure I’ve been telling myself for some time now!

Cheers to Dave and the Rumble crew, and all the judges for getting Father’s Day off to a sick inducing, sweat dripping fun Sunday morning competition! We were finished at 12pm! Now I can be my daughter’s plaything for the rest of the day!