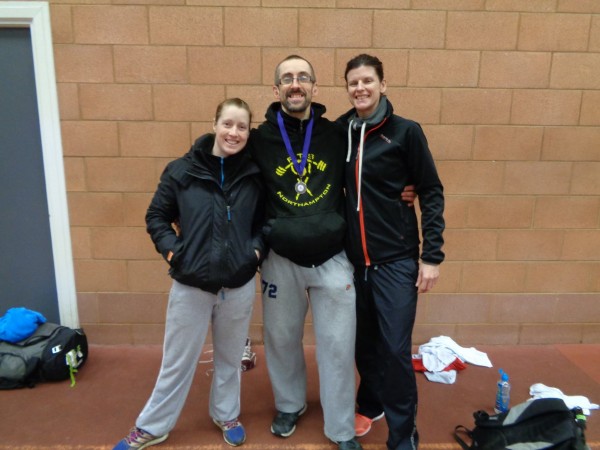 So today I competed in the Rumble Elite Fitness Challenge in Milton Keynes! Although not technically a competition as such, there were scores to beat, people to beat, challenges to overcome, sounds like a competition to me! So that’s the mindset I entered today with! I was with my PTS homegirls Kerry Gowen and Leanne Clifford, flying the PTS flag high and hard!

First things first, I LOVED IT! Just love this kind of stuff, testing all those little bits you might not train regularly, which is why I like to travel outside of my gym and see just how things hold up in another environment, under demands from another’s perspective.

This was a pretty relentless day. Started at 11am and didn’t finish until about 3.30pm – 4pm ish, with very little rest in between events for the entire duration! And I loved that! Yeah, you can go hard for 10 or 20 minutes, but can you hard ALL DAY AND ALL NIGHT?! Well folks, part of my superhero portfolio I’m trying to build is the ability to do just that! I don’t want to have that feeling of there is still something left to do, and I can’t do it to the best of my ability. I think today has confirmed I’m heading in the right direction!

I just want to say that part of today was supposed to being going up against the machine that is Paul Croft, but apparently he broke a rib at a Spartan race, or maybe it was the birthday celebrations… But anyway, you broke my heart Paul! I thought we had a date…. Next time mofo!

So each event had a series of things you had to do, lots of different modules, and there was an ‘elite’ score to beat on each event, to give you something to aim for. Like beating someone else’s PB! This was wicked motivation, great for someone like me who finds competition in every corner of life!

The events were sometimes paired up, with two groups doing one then swapping. All the events were individual, so it was all about you!

First event was the beep test! Group 1 (my group) had to do the normal running beep test, and group 2 (Kerry and Leanne’s group) had to do a military style thing of alternating push ups and sit ups per level, doing a rep on each beep. The elite score to beat on the running beep test was a very high 15.3, I managed 12.3 which I think was third out of the guys, I think Baby Dave got in the 14s to win the guys. I’m just not fast enough to keep up when the beeps shorten. I felt in good condition but it’s my usual thing; I’m too damn slow! Kerry got around level 10 on the run and Leanne won her heat and won the ladies with a score of 11 and a bit! Nice one Leanne!

Then on the swap it was my turn for the push ups and sit ups. Now this was a strange one, I had watched both Kerry and Leanne finish this completely by getting to the end of level 21, so I knew I was in for the long haul! The sit ups were a nice rest, but the push ups had to held in a plank until the beep when you did a rep. The push ups were the easy bit! Holding that position was tough! While I didn’t drop to a knee at all the whole time, I had to keep lifting my bum to get blood to my shoulders to keep pushing! So when the beeps sped up it actually got easier! Anyway, I was glad to hear the end of level 21 and then no more push ups! Or so I thought….

Second event was a ‘gymnastics’ style event, with everyone having to go though a series in order of different bodyweight exercises. Not really my cup of tea this, I’m not the most agile of folk! Kerry made a point of not enjoying this at all as the movement standards were not exactly brilliant for anyone doing this, and she’s got a point. But for me, I’d been challenged to do it so I gave it my full go, even though I’ll admit a lot of it was done not very strict! It was tough though even so, you had to do 40 of each of the following in order; Split Lunges, Alternating V-Sits, Squat Thrusts, Push Ups, Tuck Jumps, Toe Tap Crunches, Rolling Deck Squats, V-Sit Ups, Stretch Jumps and Pistol Squats. All of that, 40 reps each. For God’s sake.

The elite time was 15 minutes and 47 seconds, and I managed it in 15 minutes and 7 seconds, but my leg raising stuff was rubbish with legs bent, my pistol squats were done holding the side of the window, so you get the idea… So not my finest moment but I worked as hard as I could! Leanne managed to finish the sequence before the time limit, and Kerry rebelled fully by not doing it all in protest of not meeting the movement standards!

Third event was another pairing of two events, my group was doing a crossfit barbell workout, 30kg for the guys, 20kg for the girls of 24 deadlifts, 18 hang cleans and 12 push presses, 5 rounds as fast as possible. The elite time was 12 minutes 22 seconds, I did this in 9 minutes dead! Not bad for someone who NEVER does this sort of training! I won this by a big margin, and I think Kerry won the ladies division with a score of 13 minutes something too.

The other event was a lap of an agility course of sidesteps, speed ladders and jumps, as many laps as possible in 20 minutes. This was really fun! Now I have another admission… The final set of hurdles were really close together, so instead of jumping over them directly I jumped them to the side of them… Yes I’m a dirty cheat! At no point did I feel that my jumps weren’t high enough to clear them, I put loads of effort into the jumps, but I felt the risk of hurting myself was not worth it! I didn’t dodge the work, but I also can’t not declare my dirty cheating behaviour haha! Anyway, the elite standard was 27 laps, I scored the highest I think with 33 laps, and Kerry got the highest ladies score with 29 laps. This event also made my feet burn! I think I’ll have some fat blisters this week!

Next event was a kind of a rest event, because it didn’t go on for 20 minutes! It was the strongman section, which first had a tyre flip. 90kg, to be flipped as many times as possible in 75 seconds. They made me go first! Because it’s ‘my thing’…. Grumble grumble moan moan not giving me any rest etc! Haha, it’s ok, I felt fresh anyway! the tyre was obviously light, but didn’t have much of grip, the elite score was 27 flips, I got 30 flips, but I think the winning score was 34 flips by Dave Beaumont. Kerry equaled the top score of the girls with 24 flips, and I think she could have got the 25th flip in…

Then the next strongman event was a static hold for time of weights on chains held to the sides with arms locked as long as possible. The elite time was 1 minute 11 seconds, I thought I was on for a good time, started singing my signature ‘Bohemian Rhapsody’ stamina song, felt good, then my biceps just gave up out of the blue! 1 minute 6 seconds, bit disappointed! I think the winning men’s time was 1 minute 59 seconds! Kerry didn’t have a good one here, as soon as she went to start it aggravated a touch of tendinitis she’s been feeling recently so she bailed at the start, however Leanne put on a good show with a score of 50 something seconds getting the highest score out of the girls!

The final pairing of events was a duathlon, a spin bike ride and a run of a lap with lots of corners. My group did the cycling first, and it was…. weird. I had absolutely no idea at all how to gauge what I was supposed to be doing. We had to keep the RPM above 105 and then get the furthest distance we could in ten minutes. I got 4.3 miles, the elite standard was 5.2 miles so I was way off. I think Kerry got 4.4 miles. I just found it difficult to compete when everyone was just… sat there!

But the run was a different story! 10 minutes to get as many laps as possible, the elite standard was 17 laps, Leanne got 24 laps, and me and Kerry both got 25 laps winning our respective heats and categories! Now this floated my boat because I could see people, overtake people, pressure people on the shoulder… My kind of warfare! To be honest I just felt I was getting faster and faster, which is good, because going in I already knew Kez had done 25 laps, so I had a score to beat, but I only just equaled it!

Then there was one final event… Another strongman section of car pulling! I was pumped at this point, really looking forward to it…. Haha, well never mind! I was made to go first again, and boy did it not go well for me! The ground was wet and slippy, and I think my trainers are a bit bald for vehicle work now. So the event got changed to a vehicle push, as that was a bit more doable on the wet ground. I scored 51 seconds coming dead last out of every single person that did it! Kerry did this in 39 seconds, winning it out the ladies. I think the fastest lad’s time was 28 seconds!

Dave Peters ran a tight, well run event today, a very good test of ability, fortitude and work capacity! Look forward to doing damage at the next one!

So at the end of the day I had a brilliant time, and feel my fitness is showing a good representation of my training philosophies right now, as is the representation of the awesome girls I train. And to test that just a little bit more, now I’ve finished this write up, I’m off for a 9 mile run.

See you on the other side!