On Saturday 9th January 2016 I had my first competition of the year… The Ram Run 12km Obstacle Race. I managed to qualify for the UK and European Championships that are later in the year.

Now let’s get real. I ran a rubbish race! I ran the course in 1 hour and 46 minutes, which was way below expectations. I felt great physically, and the race itself was pretty much tailor made for me to do well with nice long running sections and really demanding obstacles. So what went wrong?

Early on I was having difficulty staying on course, constantly turning off in the wrong direction or hitting slight dead ends. I’m a bit retarded and need really clear markings and directions to run the race I like running, which is seat of the pants type stuff and not much thought process going on. Maybe about 2km in I was maybe in 6th place in my wave, with sights on the front five right in front of me with the mindset of reeling them one by one, predator style. I’m chasing number 5, turn a corner, follow him across a field, up a hill, end up in a car park… With no clue where we are or where the course is. I turn around and there’s a long line of runners behind us slowing coming to a halt. Whoops!

Eventually someone much further back finds the course again and everyone turns off and starts running to get back on, but at this point I threw a tantrum and no longer wanted to race and just decided to run instead, as I could no longer see the front runners I felt it was a lost race. As someone wise and correct has pointed out to me since, that is a lame excuse! I’m always going on to people about it doesn’t matter who’s fault something is, YOU have to take responsibility. And I didn’t! I threw my toys out of the pram like a baby, when I should have knuckled down, run a hard race and made up the ground! So I have to take a mental beating from this and learn the lesson! NEVER lose your discipline! Take responsibility and smash it!

Anyway… I have to say that despite my immature stropping the course was wicked! Loved the long runs, the section through a 4×4 driving course was really fun, steep, crazy angles to run through and loads of ‘holy moly!’ runs down hills! There was a rig section quite late on that was 6 lengths of different upper body hanging and swinging, with penalties of 20 burpees if you couldn’t do any of it AT EACH LENGTH. So you could be facing 120 burpees if you suck… So while I didn’t have to do any burpees, it was the hardest upper body rig I’ve ever done, my arms were fried for at least ten seconds after that!

But the Ram Run on Saturday was not about my physical tests, but the mental ones. As well as learning more about my own lack of discipline (which still disgusts me), I encountered possibly the most amount of fear I can remember as an adult…. I actually felt like the 6 year old boy I once was, terrified to the point of near paralysis. This all sounds very dramatic but trust me on this, I wasn’t expecting it!

On the Nuts course I’ve been on a couple of times I have encountered fireman’s poles, and it’s been quite a mental battle to go down them. Weird, right? I climb up stuff no problem, fly up and down cargo nets like I’m Spider-Man, but a pole going down… There is a glitch in my brain.

Well there wasn’t any fireman’s poles on Saturday, but one of the obstacles, the ‘Bridge of Hope’, was basically a big metal road bridge with ropes hanging down about 10 feet into the river below, which was about 10 feet deep and raging like an angry torrent of cold hatred. I climbed over the side of the bridge, grabbed the rope, crouched… and froze. For ages. I then pulled myself back up, stood on the side and considered quitting completely. I was that scared of going down that rope. Other people were going past me, splashing into the water, I just wigged out completely. Somehow, I didn’t quit. I lowered myself, had the strength to control the descent and then just swam to shore. So what was the big problem? I think I’m a control freak, and lowering without control just freaks my mind. I will be tackling this issue in every race from now on!

And now to discuss the one single obstacle I couldn’t do, the ‘Bridge of Double Despair’. I’m taking nothing away from this one, this was just nails, possibly the hardest obstacle I’ve encountered yet in anything! Basically you had swim across the crazy river (you swam sideways the current was that strong) to some ropes hanging down from the side of a big metal road bridge, pull yourself up to the bottom of the bridge, then you had to swing underneath the bridge to the other side using the superstructure (the first picture I’ve included is me doing just that), then pull yourself up the far side of the bridge over the big metal girders. I got all the way to the far side but just could not figure out how to pull myself all the way out. I couldn’t get my legs up to assist in the climb, and eventually called it some names as I fell back into the river. Dave Loveridge also couldn’t complete this obstacle, and nearly got taken away down the river when he fell back in, having several rescue ropes thrown to him and missed as he was getting swept away! Crazy! Luckily he made it out alive! But of course let’s not forget someone who could complete this nightmare of an obstacle, the mighty Kerry Gowen, which is the other picture I’ve included of her just conquering this challenge, as proof that this woman is just incredible. I mean she should be, she trains hard enough!

So when I crossed the finish line I felt physically untaxed, because I’m a stroppy, immature idiot, but mentally I had loads to be getting on with. One thing I also took away though as a bonus was that I DIDN’T get hypothermia, not even close this time. I did get really cold, and because I’m an idiot I was standing round waiting for the chance to get my dry clothes for quite some time, and got rescued by Mark and Linda Johnson who lent me a dry robe and let me sit in their warm car! Thanks guys!

I came 5th in my category which was good enough to qualify, but I’m not a fool enough to think I deserved it. Being a winter race it wasn’t a massive turnout, I ran instead of raced like a fool, and I have much to learn! But I’ve said this before and I’ll say it again, if you take obstacle racing seriously as a competitive sport, it is nails. 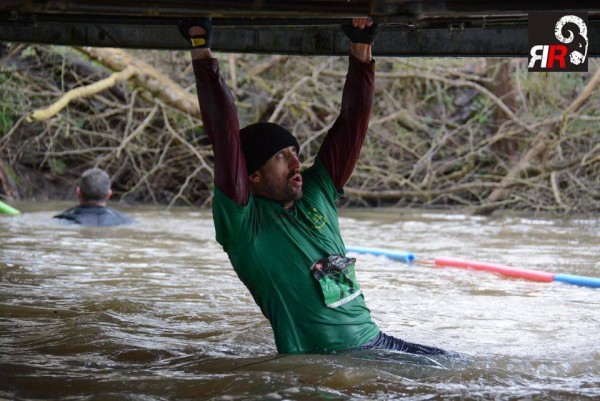 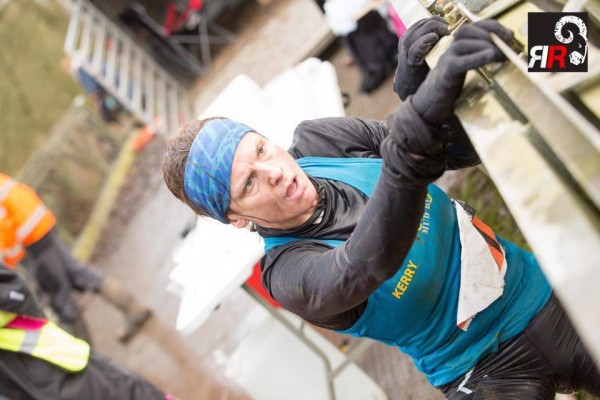