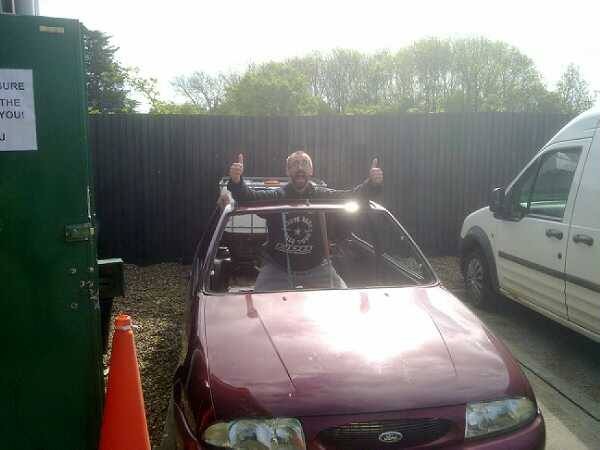 So on Sunday 10th of May 2015 I (Ali) competed in a masters (Over 40) strongman competition. Yes I know…. I’m cheating by not actually being that old yet. But I’m close, and I had already contacted the organizers to check it was cool. It was an openweight comp, and with me weighing around 80kg I figured it would even things up a little if I had a couple of years on the other masters!

I liked the look of the competition as it wasn’t too heavy (as I’m pretty weak) and it also had events I’ve never done before, and it was at a very cool strongman gym that I had wanted to visit AND it involved a car walk! The chance to pick up and walk with a fucking car! I was sold!

On this day Faye had also signed up to do the GBPF East Midlands Bench Press Championships in Colchester, so Pj (bless her) drove me down to Kent for this and was my general slave with regards to filming and stuff.

On arrival after a 90 minute or so drive I was immediately collared by some big dude to try out the car walk. Never being able to resist someone calling me out I got in, strapped up and picked it up. Don’t get me wrong, it felt fucking heavy, but I had beaten gravity so I was happy to give this bash in the main competition. I suspect I may have only moved it a few inches, but as it turned out the organizers were taking out the car walk as they felt it was too difficult for this competition. Some other time perhaps, Mister Car!

Now the main thing I had to deal with on this day was something that had been bothering me for a few weeks…. Illness. Id been hit with a double whammy of chest infection and also a lovely stomach bug, and had appropriately  runny shits all day. My main focus going into each and every event was “Don’t shit myself!”, which is probably suitable for masters competitions but I’m pleased that I managed to attempt everything and not create a mess! In fact I would say that somehow this didn’t affect my performance at all. I’m just generally out of shape from lack of regular training at the moment.

The first event was one I’d never done properly before, car deadlifts. It was listed as 200kg for reps in 60 seconds, it was a car with a barrel in the boot. The handles were to the sides and the height in the pick up was quite high when you took out the slack. Some of the early guys going up were making this look pretty hard so I was a bit nervous, plus I wondered how much not using straps would affect me in an event like this. 60 seconds later, 23 reps and 5th place out of 10 I was quite pleased! The winner got 32 reps I think, so apart massive quad pump and ‘lego’ hands I was raring to go!

Second event was a viking press with 80kg. Again, an event I’d never done before. I was doing some warm up reps and they told me I wasn’t allowed to power jerk it or leave the floor with my leg drive. Booo! How am I supposed to make up for being a skinny weak dickhead? As it turns out, I wasn’t supposed to. 14 reps and last place, with the winner getting 39 reps! Ah well, my overhead is so pants I’m always going to be last so at least it wasn’t a no-repper!

Third event was 90kg in each hand farmers walk. I was looking forward to this as I like moving events and running around, and on the pick up the handles felt proper light, like polystyrene! Hahahaha! So then I think ‘Chaaaarge!’….. And my legs are not co-operating. Haha, proper jellified still from the deadlift reps! Rather amusing and frustrating with me willing my legs to go faster! Still, 22 or so seconds and 6th place.

Because we had blitzed through the first three events there was then a lunch break of about 90 minutes, which let me get my legs back and assess the mental battle of losing my lungs and guts. Nice!

Fourth event was another event I’d never done before; Conan’s wheel! I looked forward to this one, seemed to be gruesome and funny! The weight was 180kg, I figured if I could get a few turns it would be a good crack. I was planning on singing a song as I did it to help keep going and block out the pain, Bohemian Rhapsody seemed a good song choice due to length plus if you could pull it off you were bound to get some people joining in, could become quite an event in itself! Strongman Karaoke! Anyway, decided against singing as this was my first time doing it, and nobody who went up before me managed a full turn. Once it was in my arms it was time to just chug away. Not too fast, just steady as hell with an even rhythm. Managed 2 and a bit turns which was good for 3rd place, and I loved this event! Good for someone with my cardio ability.

Fifth and final event was the fucking atlas stones. On paper the run started with a 60kg stone…. Piece of piss right? Only the loading platform was one of small metal rings and the 60kg stone had to be placed in a ring that was above my head! Hahahahaaaaaa, fuck off! So combine me being shit with stones, and being shit with overhead, and you have shit squared! So I was the only person to not get the first stone, and I can’t use height as that much of an excuse as the shortest guy in the comp got 4 or 5 stones and also won the whole competition! I just need to train stones more often. Fucking things!

So overall I came joint 7th, and I had an absolute blast! Really, really enjoyed myself. Fantastic venue, lovely people, cool varied kit, what more do you need for a good strongman competition? I’ll be hopefully heading back there for their summer competition on 1st/2nd August (https://www.facebook.com/events/1559969054263480), with a few other PTS folk.

Good times, and here’s the video!