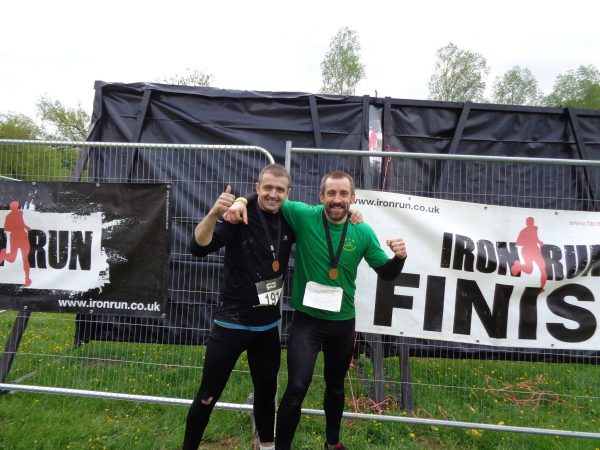 Today (Saturday 14th May 2016) I slew a demon and beat the Iron Run 12km Obstacle Race! This was my first competitive race last year and I had to withdraw early from injury, but not today! And I feel great!

Went down to Kettering with Roberts Locmelis, it’s only his second race but he did very well in his first race at the Suffering so I’m expecting good things! The weather was spot on for racing, not too hot, not cold, not much direct sun, no rain, good times!

We were in the first adult wave at 11am, which seemed enormous! After a polite warm up which I danced through, we were off!

So the crowd surged forward and everyone is pegging it… Until the first obstacle, a beam you have to jump/climb over, and it’s wide enough for three people to try at once, but actually only wide enough for one person to successfully do it. For crying out loud… So a massive rush and crowd and general calamity, elbows, feet and who knows what getting thrown around. Rob managed to get over quick and was away, but I got caught squished without enough room to swing my legs. Eventually I just went under the stupid thing. Not how you want to start a race! But I’ll say this now, while this bit seemed really stupid and badly thought out, it was the only negative in the whole race, just a shame it was in the first 100 yards!

After this it was time to settle down for some running. Lots of running! The Iron Run is the absolute opposite of the Toughest race from three weeks ago. It’s almost all natural terrain and obstacles based around the terrain, and it’s brutal! Slogging through tons of river beds, ditches, and the hills! The hills! Up and down those horrible things!

When it comes to obstacle racing my biggest problem is wading and sloshing through uncertain ground. I slow to a grindy crawl and so this race today being all terrain was the perfect opportunity to work on that! I think I actually did a better job than normal with this sort of stuff, but I’m still rubbish at this aspect. If I was getting overtaken anywhere in this race, it was in the more uncertain bits. So while I felt I was better, it’s still frustrating to get passed because I’m a wimp at wading!

There were still some walls and bits and bobs to climb over but they were just fun little breaks before you got back to getting messed up by the terrain! But there was a wicked huge slide, about 150 feet long, and I actually enjoyed it! First time I’ve enjoyed a slide AND I didn’t lose a contact lens in the process! Bonus!

A wicked day and a very physically demanding race, so now I’m going to play with my daughter Ellia and hope my legs freshen up for tomorrow’s fitness competition with the Rumble crew in Milton Keynes!