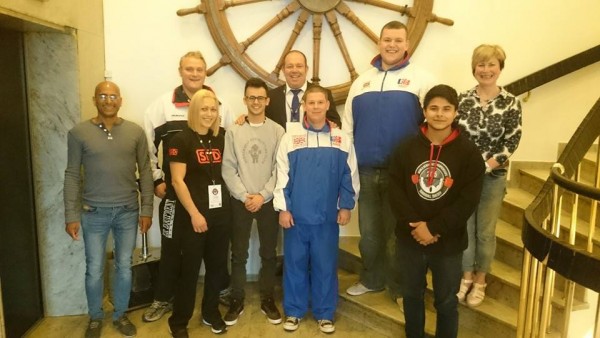 So there is the video, but that does not really display the full story of this little venture of my journey into powerlifting… read on for the full story!

Journey to the Worlds

Up up and away…

As I sit here at Heathrow airport, terminal 5, waiting to board my plane to Sweden and the IPF World Bench Press Championships it all starts to become real, and I can now finally enjoy the experience, as yesterday’s attempts at relaxing and pampering in preparation for the comp was a dramatic fail with hairdressers, nail technicians, and just life in general making the day more stressful than if I’d just gone to work as normal. However the day ended well with a sports therapy treatment from the best in Northampton, Ashley Rowley, and then home to pack my bags with help from Ellia, to then read her a bedtime story before cuddling her off to sleep – going to miss my lil squishies when I’m away.

Up bright and early this morning to be picked up by my Dad (thank you!) to drive me to the airport… I think secretly apart from helping me out and being there to support me in my little ventures (as he always has done) it also settles his mind to not worry so much if he delivers me as far as he can, because it doesn’t matter how old we get, Dads just worry, it is kind of their job! Something I am appreciating more and more as my kids grow up.

Anyhow, it is now just time to wait for the gates to my plane to open, bit more window shopping in the Gucci, Fortnum & Mason, and Armani shops, before the 2 and a half hour flight to Stockholm, to then board a 3 and a half hour train journey to Sundsvall, the heart of Swedish bench Pressing, to finally arrive at the hotel to meet the rest of the Great Britain team at around about 7-8pm this evening, 8-9 hours from now… it is going to be a long day!

Just landed in Stockholm, after a very interesting plane journey. There was some scuffle when I got on the plane, nothing major just old people and kids having being designated seats next to emergency exits, so everyone was playing musical chairs to get it sorted, so I ended up being ‘in charge’ of one exit along with a Swedish couple that were travelling home from China from a holiday/business trip. Robert and Anna were their names, and they were on the final part of a 24 hour journey, and they had been drinking beer from, they think, 7am… I say they think because travelling through so many time-zones had confused them a bit and they were not really sure what day or time it was at all! They were lovely though and spoke wonderful English (despite the occasional slurring), so after we had discussed who was in charge of what when we crash (me being the ‘strong one’ having to remove the door, Robert taking control of the other passengers, and Anna really wanted to pull the ‘pully thingy’ that made the inflatable slide come out – it is important to get these things sorted!), they then went on to tell me lots of really interesting things about Sweden. So for example, did you know, that the forest areas in Sweden (which there are many of) are known as ‘All Mans’ areas, meaning that you can pitch a tent, park a caravan or sleep under the stars anywhere for 2 nights, even if the land is part of someone’s home, as long as you are not in sight of the residence. And after those 2 nights you only have to move 50m to re-pitch again. They also informed me on the drinking laws of Sweden… so you can only buy alcohol that is above 4.2% in restaurants, bars, or a special government shop (of which there is usually 1 per town) called ‘The System’, hahaa, so all alcohol sold in shops is below 4.2% and the hours of sales are very restricted – good info to know for after the comp!

It doesn’t matter which country you visit there is one thing you can rely on… trains are delayed! So after waiting a whole hour for the train I’m finally on the last leg of the departure trip, and travelling 1st class… coz , you know, why the hell not, I have been on the road now for 10 hours with another 3 to go, it is happening in comfort!

Eventually I arrived at the hotel 15 hours after leaving my house, and pretty much went straight to bed… exhausted!

Taking on the World

Had a great nights sleep, bar a few nightmares about not making weight, eating bread, Swahili speaking rapists, and some 10 headed dragon snakes and munchkins… so pretty normal for me! 😉

So after a team pic and weighing myself on the IPF scales at the hotel – 56.65kg thank god (for the under 57’s class) – It was time to wait until 1pm when I was to be picked up from the hotel to go to the competition venue. 3 hours to kill with no food, no drink… well I thought 1 coffee wouldn’t hurt, so I went to the breakfast room, and oh amazing! The Swedes have definitely got it right when it comes to breakfast, a buffet of meats and breads with a little bit of fruit, damn that was not what I wanted to see in my hungry depleted state! Bring on tomorrow when I will be in full on devouring mode.

Eventually the time came to go for kit check and weigh in and then EAT!!! It had been 22 hours since I last ate and I was starting to feel a bit ropey to say the least! At this point Marc, the head coach, was refereeing the group before mine, so I was being looked after by ‘Belly’ James Bell, the assistant coach. He was great, pretty much a novice to the worlds scene as me, but great, supportive and most importantly calm and helpful to show me what to do, where to go, and did a great job of holding the fort until Marc was back.

The warm up room was something else, Eleiko and ER Equipment powerlifting HEAVEN! Proper geek feast! And a big screen with the live stream of the lifting on too… which was pretty much surrounded by coaches from a variety of nations.

My warm ups went well, it is a strange experience for me letting someone else take complete control, I just lifted the bar when told to, Marc is VERY experienced in this game, so I have to get over my control-freakness and let him do what he was there to do, it was kinda cool in the end, warm-ups felt good.

People have told me that performing on an IPF powerlifting stage is another world to the regional comps that I am used to, and they are not wrong! It wasn’t particularly harder, I don’t really get phased by the crowd, lights, cameras etc, but to experience it at a whole another level, it is AWESOME! I loved every second, I loved being coached, I loves the stage, and I loved being amongst the insane, inhuman, awesomeness of the best in the world! Seriously it is incomprehensible the weight that these ladies lift, I benched 82.5kg, the 87.5kg, and then missed my attempt at 92.5kg (which would have been a personal best) but I gave it a good fight, next time it is mine… the next lady up from me finished on 95kg, and the next 100kg… then there was a big jump between us and the other 4 competitors, with the winner, from Russia, finishing on 152.5kg, that is a crazy weight! I would be happy to deadlift that let alone bench press it! Enough respect, and a complete pleasure to share the stage with this level of competitor, it inspires me sooooo much, I can’t wait to get back training, and hopefully come back next year and show my improvements on the best stage in the powerlifting world, the IPF platform.

I want to finish be just saying thank you everyone that made this trip possible, firstly to Peter Moorhead from Celebrate Health & Fitness, and David Braithwaite for their sponsorship, To Marc Giles and James Bell (Belly) for giving me the opportunity and everything on the day, to Arun Singh, one of the UK’s best strength coaches, for the bench shirt, coaching and general support, and of course to everyone that helped out back at home while I was away, Charlotte for looking after Ellia & Harley, Ali for being my best friend and support ever, and to my dad for doing what dad’s do best and being a taxi! Plus I’d like to thank all the PTS people for their general support for my foray into powerlifting, it’s nice to know the gym takes an interest in what I get up to! 😉

And finally, my Grandad, Mr Dennis Hutchings, passed away the week before I left, and I missed the funeral due to the comp. He was a very driven man, and I hope I have inherited some of that from him, he was 87 years old and was suffering for a few years due to his failing health, so I am glad that he was finally released from his pain, and can now rest, in peace. Hope I did you proud Grandad. All my love.